Cristian Jardan (Unimedia.info) and Ana Dubeli (Locals.md) are part of a new generation of journalists working to change reporting in Moldova. The media environment is still developing, and freedom of the press is a young concept just beginning to take shape. “There are some independent media, not as many as there should be, but we are proud we are one of them,” explains Jardan, who runs one of the most popular news portals in Chisinau.

The two came to TechCamp Warsaw in February 2017 looking for innovative technologies and strategies that would put a new face on journalism in their country.

Learning about that MOJO

Mobile journalism, or “mojo” was the right approach for their needs. The two met TechCamp trainer Maciej Słomczyński of TVN24, who introduced them to the concept. “Mobile journalism is a great opportunity for Moldova and I will explain why. In my opinion, it’s the only way you can produce new content and diversity with less money. It’s very efficient and modern and is growing and developing with great speed. Using it will offer a lot of benefit,” Jardan says. The important thing to remember is that “you always have your camera in your pocket, if you use it correctly its a very professional tool” says Słomczyński.

Encouraged by their discovery, Dubeli and Jardan applied for a small TechCamp follow-on grant to expand these skills to other key journalists in the country. With those grant funds, they organized their own hands-on training called “Cultivate MOJO” in August 2017, with Słomczyński and a special guest from Moscow, Alexey Ametov, publisher and co-founder of Look At Media, to train 16 young and promising journalists about mobile journalism.

At the August event, participants learned to think digitally and acquired practical techniques like editing, converting files and subtitling videos.  They then paired up in teams and made their own videos that could be used for future broadcasts. “We see there is great potential here and we need to go further,” says Jardan.

As a result of their training, five participants have since become part of the locals.md and unimedia.info teams, and are now working to develop mobile video content for these platforms.  “We had lack of knowledge and no idea how to solve technical questions on video production before the TechCamp Warsaw,” says Dubeli. “But now at least two media are developing mobile journalism in Moldova!”

TechCamp Reconnect Inspires the Next Step

Dubeli and Jardan didn’t stop there. They again crossed paths with Słomczyński at a new event in September 2017 – TechCamp Reconnect, which connects alumni from different TechCamps who are working on similar projects. At Reconnect, the three developed a new idea for a stand-alone news broadcast using only mobile video. “We plan to launch the first web mobile program in Moldova,” says Jardan. “It will be something that you see everyday on the TV station and also on the online platform, using only mobile.”

The show will be interactive, streaming via Facebook Live so the audience sees the comments in real time. “During the live program, if your guest is saying something controversial, the host can respond” explains Słomczyński. The host of the show is a blogger who came to Dubeli and Jardan’s follow-on workshop in Moldova.

“With the help of your great trainers and experts we have successfully coped with mojo,” Dubeli says.

“I’m truly amazed and so happy I could help,” says Słomczyński. “I also learn a lot, I take as much as I give. My advice to future trainers? Give all the knowledge you have and by the process you will be better as well.”

Dubeli and Jardan’s challenge is not unique in Moldova. In fact, many journalists struggle to overcome an older approach to journalism that doesn’t always involve innovative investigative techniques. To address the need for technology skills and tools for journalists, the U.S. Embassy in Moldova, U.S. State Department and the Digital Communications Network are hosting a new TechCamp specifically geared toward Moldovan and Romanian journalists and media organizations. TechCamp Moldova will focus on equipping journalists with skills to improve reporting and help ensure citizens have access to accurate and timely information.  TechCamp Moldova will take place November 30 – December 1, 2017. 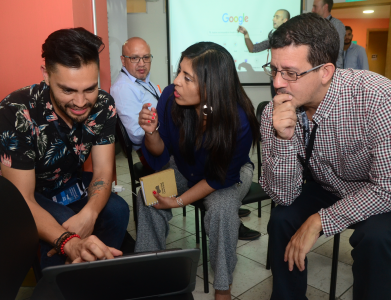