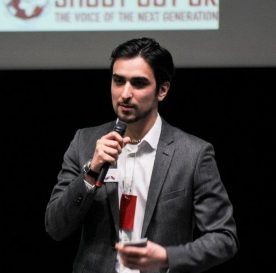 I completed my undergraduate degree in Politics & History at the UNIVERSITY OF BRUNEL in 2014 and my Graduate Diploma in Law in 2015. During my time at university, I launched my own company called SHOUT OUT UK. We are a multi-award winning independent youth news platform that provides young people with the tools necessary to engage in politics and a platform to shout out and be heard. In 2015, my company went on to launch our first investigative documentary ‘Anonymous: A Million Men’. The documentary includes interviews with Russel Brand, Conservative MP Chloe Smith and the secretive organisers of the Million Mask March itself. The film was later acquired by Shorts International for worldwide distribution. On the 28th April 2015, in collaboration with Channel 4 and ITN, my company, Shout Out UK, launched Britain’s first ever Youth Leaders’ Debate. The event gathered 7 leaders of the seven largest British parties’ youth wings to debate on political issues. After 10min the #YouthLeaders was trending in the top six on twitter. After the Youth Leaders’ Debate, we began expanding our profile of interviews, starting with an interview with the then United States Ambassador to the UK, Matthew Barzun. On the 8th May 2015 I was invited to become an ESRC Knowledge Exchange Fellow, after I managed to win a bid for a research/marketing grant, in cooperation with the Crick Centre, a research group based in the University of Sheffield. The subsequent videos we made ended up racking up a collective viewership of half a million. In March 2016, I was declared the winner of the Harrow Business Den 2016 and have since launched a Political Literacy Course, after Shout Out UK became an accredited AQA centre. In less than a year we expanded into various boroughs in London and beyond, launching in both Dartford and Cambridge in September 2016, and then in Yorkshire from 2017. We have also secured endorsements from academics and journalists like Fatima Manji from Channel 4 News.