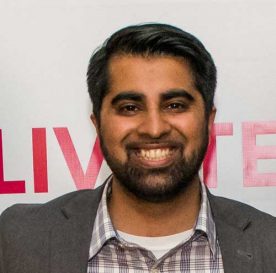 Khuram Zaman is the CEO of Fifth Tribe, a leading digital agency serving the Washington DC Metropolitan Area based out of the 1776 Startup Accelerator. In his professional capacity, he has provided digital marketing services to clients as diverse as the Department of Defense, Kaiser Permanente, Oxfam America, Ernst and Young, and The Hult Prize. His writing has been featured in Forbes, Entrepreneur.com, and Business2Community. In 2017, Khuram came in 1st place and won $5,000 for a dataset on ISIS Religious Texts in the Kaggle September Dataset Competition. In 2016, his work in data science drew recognition when his dataset on pro-ISIS tweets became the best performing dataset on Kaggle for the whole year. He gave a keynote address entitled “Innovation Culture: Multiplying Impact Across Sectors” at the Fall 2016 Business Analytics Form at the University of Tennessee, Knoxville. In 2015, his company was appointed to Private Sector Committee along with Goldman Sachs and IBM to the Global Community Engagement Resiliency Fund (GCERF). In December 2014, Khuram and his co-worker won 1st place at the Hedaya Hackathon during the Global CVE Expo where they developed and prototyped a crowdsourcing and social media platform to counter violent extremist messages. Khuram is the co-founder of Tekfeuds, an annual event that uses Oxford-style debate on technology issues. In his free-time, Khuram serves as a mentor at the Peace Tech Accelerator and Georgetown University’s Summer Launch program.