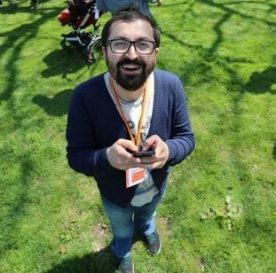 Kenan was born in Düzce in 1984. He graduated from the Mechanical Engineering from Sakarya University in 2007. He studied Master of Business Administration at Beykent University. While studying at Sakarya University Kenan became interested in volunteerism and NGOs. In 2007 he took a training for peer education. He started to work at a private company as a quality system engineer in 2007, and became interested in working for civil society. In 2009-2010 he worked as the Istanbul 2010 European Capital of Culture Agency Field Coordinator at Volunteer Program. Between the years 2011-2014 he worked as a Project Coordinator at Istanbul Bilgi University Civil Society Studies and Istanbul Bilgi University Youth Studies Unit.

He is still studying at Bilgi University Media and Communication Systems and his thesis is about ‘How NGOs are using Media and Technology.’ He worked for ‘Dialogue for a Common Future Association’ as a General Coordinator from January 2015 to August 2015. He worked for the Thing Project which is about social tech and social good for 3 years as a Communications Consultant/Project Coordinator. He’s also working for EU Projects as a Communication Adviser. Now he’s working at Habitat Association. He likes social media tools and technology.